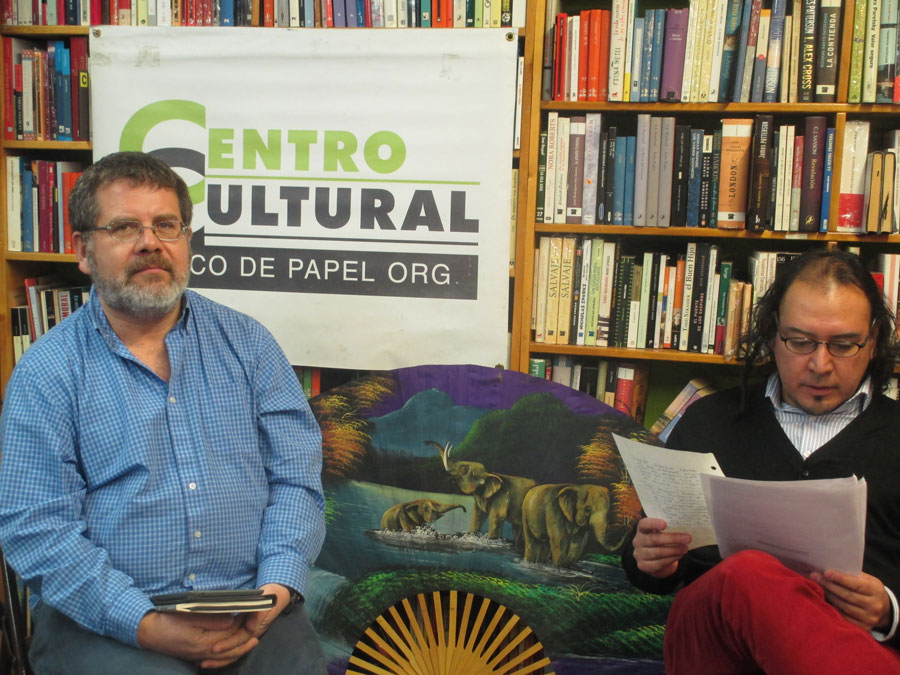 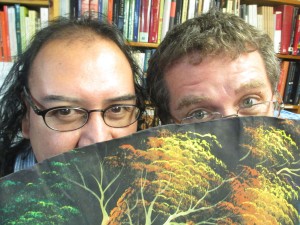 Centro Cultural Barco de Papel made a tribute to Chilean writer Pedro Lemebel (1952-2015) who pass away last January 23, 2015 at the age of 62. The event, held in the middle of a snow storm in New York, remembered his works. Play writer Pablo García Gámez (Venezuela) and Chilean Poet Gonzalo Paredes read and commented parts of his work.

Lemebel’s work addresses the theme of the marginalization in Chilean society using some autobiographic references. Permanently discriminated for his homosexuality, Lemebel was one of the most influential artist not only in Chile but throughout Latin America and the world.

He was an openly gay essayist, chronicler, and novelist. He was known for his cutting critique of authoritarianism and for his humorous depiction of Chilean popular culture, from a queer perspective. In 1999, he obtained a Guggenheim grant to compile stories about homosexuality in Chile. His essays were published in Grand Street and was nominated for Chile’s National Literature Prize in 2014.

He called himself a “queen” (una loca) and “a poor old faggot” (un marica pobre y viejo), and whose style and obsessions were forged on the social margins and in political opposition. Lemebel defined himself against establishments of all kinds: against Pinochet’s military dictatorship, but also against the Marxist resistance that condemned homosexuality as a bourgeois vice; against the neoliberal consensus behind Chile’s “economic miracle,” but also against the L.G.B.T. activists who Lemebel believed were making commodities of queer suffering and queer lives. (More about Lemebel (in Spanish) More about Lemebel in our blog (Spanish).

Manifiesto (I speak for my difference)

I’m not Pasolini asking for explanations
I’m not Ginsberg expelled from Cuba
I’m not a fag in a poet costume
I don’t need a costume
Here’s my face
I speak for my difference
I’m defending what I am
And I’m not that weird
Injustice pisses me off
And I suspect from this democratic cueca*
But don’t you talk to me about the proletariat
Because being poor and faggot is worse
One must be acid to stand it
It’s giving a rodeo to the corner machos
It’s a father who hates you
Because his son plays for the other team
It’s having a mother with the hands burned by cleaning products
Hands grown old of being clean
A mother who slept you when you were sick
Because of bad behaviors
Because of bad luck
Like dictatorship
Worse than dictatorship
Because dictatorship shall pass
And then comes democracy
And right behind it comes socialism
And then?
What will they do with us, comrade?
Will they bind our braids in bundles?
With a cuban AIDS-asylum as destiny?
Will they put us in a train with destiny to nowhere?
Like the boat of the general Ibañez**
Where we learn how to swim
But no-one came to the coast
That’s why Valparaíso turned off his red lights
That’s why the brothels
Gave black tears
To the fags who got eaten by crabs
This year, the Human Rights Commission
does not remember
That’s why, comrade, I ask you
Does it still exist the siberian train
of the reactionary propaganda?
That train which runs at your very eyes
When my voice becomes too sweet
And you?
What will you do with that memory when we were kids
Masturbating each other and other things
In the holidays at Cartagena?
Will the future be in black and white?
The time in working nights and days
without any ambiguity?
Will there not be some fag at some corner
mentally disturbing the future of his new man?
Will the flags of our free homeland
let us embroider birds?
I left the machine-gun for you
You have cold blood
And it’s not fear
The fear was slowly going
Because of catching knives
In the sexual cellars I’ve been to
And don’t you feel offended
If I talk about these things
And look at your package
I’m not a hypocrite
Don’t women’s tits
make your sight go down?
Don’t you believe
that alone in the mountains
we couldn’t come up with something?
Even if you hate me afterwards
Because of corrupting your revolutionary life
Are you scared of your life getting homosexualized?
And I’m not talking about of shoving it up and off
And just shoving it up and off
I’m talking about tenderness, comrade
You don’t know
How difficult it is to find love
In these conditions
You don’t know
What is to carry with this leprosy
People keep their distance
People understand and say:
He’s a fag, but he writes good
He’s a fag, but he’s a good friend
Super-nice
I’m not super nice
I accept the world
Without asking for that
But they laugh anyway
I have laughter scars in my back
You believe that I think with my ass
And at the first grilling*** from the CNI****
I was spitting everything off
You don’t know about manhood
I never learnt it in any headquarter
I learnt my manhood from the night
Behind a post
That manhood that you brag about
Was shoved up to you in the regiment
A murderer soldier
One of those is still in the power
I didn’t receive my manhood from the party
Because I was rejected with laughter
Several times
I learnt my manhood by participating
In the hard times of those years
And they laugh at my faggot voice
Screaming: it will fall down, it will fall down!
And even though you scream like a man
You haven’t succeed that he goes
My manhood was the gag
It wasn’t going to the stadion
And punching because of a football team
Football is another covered homosexuality
Like boxing, politics, and wine
My manhood was biting the jokes
Eating rage to not kill everyone
My manhood is accept myself as different
To be coward is way harder
I don’t offer the other face-cheek
I offer my ass, comrade
And that’s my shame
My manhood waits patiently
For the machos to grow old
Because in these times
The left-wing sells his flaccid ass
In the parliament
My manhood was hard
That’s why I don’t go this train
Without knowing where it goes
I’m not gonna change because of the marxism
Which rejected me so many times
I don’t need to change
I’m more subversive than you
I’m not gonna change only
Because of rich and poor
Go to someone else with that tale
Also not because capitalism is unfair
In New York faggots kiss each other in the street
But I leave that part to you
Who is so interested in
not letting revolution to get completely rotten
I give this message to you
And it’s not for me
I’m old
And your utopia is for future generations
There’s so many who are gonna be born
With a broken wing
And I want them to fly, comrade
That your revolution
Gives them a piece of red sky
So they can fly.

*chilean national dance
**chilean dictator who shot a boat with hundreds of homosexuals while still in the sea.
***torture technique: an electrified grill
**** Pinochet’s secret police

This text was read as an intervention in a political public ceremony of the left-wings chilean parties in September 1986, in Santiago de Chile. The military dictatorship of Pinochet will be over 4 years afterwards.