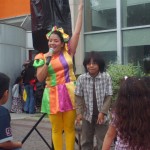 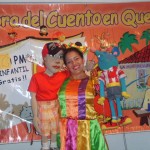 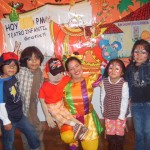 The Story Hour program of Barco de Papel presented on October 3 2009 as part of the program of the  New York Book Fair Expo celebrated in the Flushing Meadows Corona Park, a children activity called A jugar con la Cariñosita (A person who is tender and affectionate), an hour of playing, singing, puppetry and tales with this lovely personage and her tenderness and playful personality presented right in front of the  Queens Museum. She showed that it is possible to learn having fun.

La Cariñosita is a creation of Katherine Leyva a cuban actress graduated from the National Theater School of Cuba. Her first national television appearance was when she was twelve year old in an children tv series. In 1997 she started as a professional actress working for the children programming of Cuban television, she participated also in soap operas, radio, movies and voice doubling for movies and television. She received several national Cuban awards for her acting in theater, and television. In United States she worked for a Venevisa tv production as  lead actress for a venezuelan-american production. She was a regular actress for the theater series of Ollantay Center for the Arts. and had the main role in Paula Crequet’s comedy, La Esposa y El Maniqui presented in the Hispanic Theater Festival in   Lawrence, Massachussets and int the Theater Art Marathon of  Teatro Iati in NY( 2010).