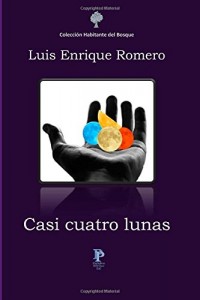 Puertorrican author Luis Enrique Romero debuted as a poet in New York last June 2 with his book  Casi cuatro ulnas (Almost four moons), published by Palabra-Pórtico Editores. This is his incursion in poetry, the result of a ‘six year work of papers hiding under the mattress’ as the author said.

Romero has made a distinguished career as actor, director, singer, playwright and political activist and with this book he made reality his dream of entering the lyrical world of poetry. After a successful launch and presentations in Puerto Rico, Romero came to New York to present his book in United States where there is almost as many Puerto Ricans as in the island. “Casi Cuatro Lunas is a collection of poems centered in love, although is also about the sea lashing the coast. It is about the moon that illuminates the passions, but who also punishes the bones. In a quick lecture it seems an oblique call of attention to those who forgot their roots.” he said.

Chilean poeta Bernardo Reyes, nephew and biographer of Pablo Neruda, wrote about this book: “As he describes in a verse that refers to the arrival of the beloved, Luis Enrique is the heir of that air that announces, its affectionate emergence of simultaneously land and sea summited to the hardship of forces and passions that seems the end of the world. Because that is the Caribbean in Puerto Rico; the light passion that becomes wind storm, total destruction and building from scratch. Or complete heartbreak, only to have again an empty heart that can be replenish with a newly grown love.”

The event was animated by a musical presentation by singers  Martín Díaz Céspedes ( video), Emanuel Roque ( video), “El Guantanamero” Luís Alvarez and Enrique Romero himself (video). Luis Rodríguez opened the event and made the introduction of Romero and Puerto Rican actress Belange Rodríguez interpreted some of the book poems (video). Distinguished personalities of the puerto rican community in New York assisted considering It was an excellent opportunity for the assistants to know about this new facet of this well know artist and activist in Puerto Rico. Find event photos en our Facebook page. 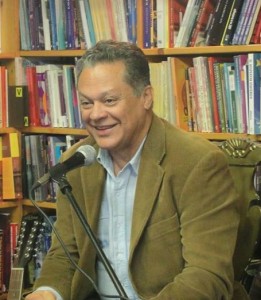 Luis Enrique Romero is known for his work on stage productions, films, soap operas and various tv programs in Puerto Rico. Born in Santurce, on June 23, 1953, his family moved to Manatee when he was a child, and there he spent much of his life. Early in his life he starting showing his  musical vocation by singing and playing guitar, then he studied music theory and trumpet with Severiano Vega and continued singing. His tenor voice  guarantee him later a passport to the theater.

At the same time he obtained a BA in Natural Sciences (1974) at the University of Puerto Rico and upon graduation he joined the Department of Quality Control of David & Gek in Manatee, where he worked for nine years and began his political activity with the PIP political party. He completed a Masters in Business Administration at the World University and served as professor of Business Administration and chaired the Manatieño Cultural Centre from 1982 to1987.

Besides his political activism, he has been a well known voice in criticizing the policy of Univision TV in the island of replacing the local and cultural programming by imported programs,  alien to the local culture and that has hurt workers in the arts and the media.

As an actor began in the theater in 1985 with the play “Jesus Christ Superstar” in the Juan Boria Dorado Theatre and then as a tenor in the comedy “La Muela del Rey Farfán (The wheel of King Farfán)” in Santurce, still presented today and completing  90 productions. He started in television in 1990 on the soap opera “Tormento (Torment)” in WLII TV and then the permanent cast of “El super pueblito (The super town)” on WAPA TV. He debuted in film with a role in  “La guagua aériea (Air Bus}” (1993), then he starred in Psicosis (Psycho) (2003), Desamores (2004) and Cayo (Key) (2005).