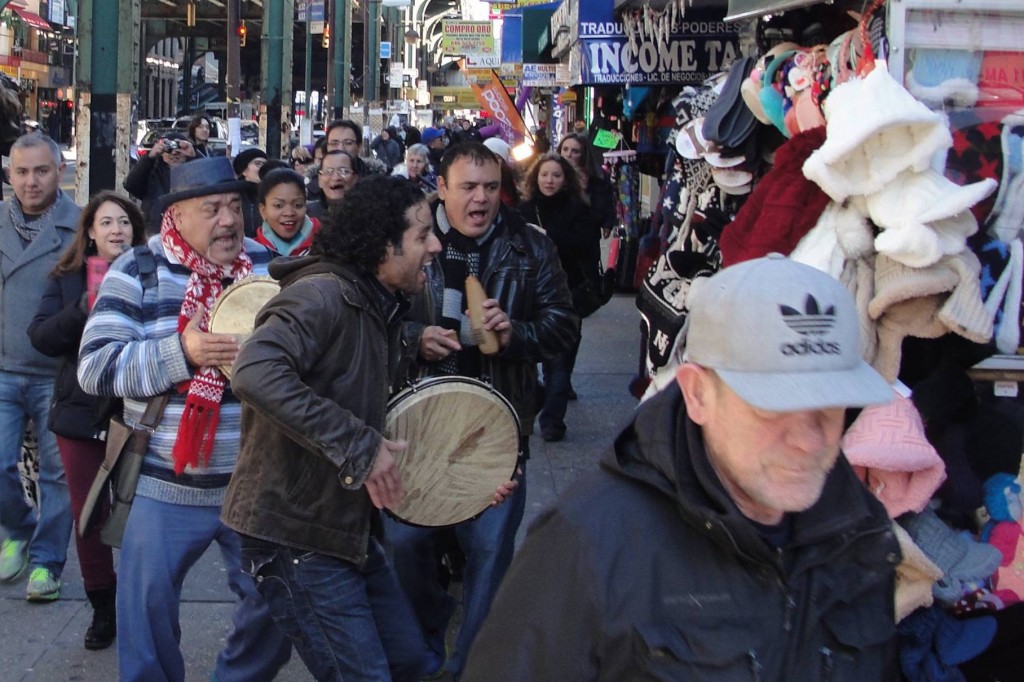 For the second year in a row, the organization known as R.Evolución Latina presented its Parranda of Kings in Queens at Centro Cultural Barco de Papel, joined by the group BombaYo and the 82nd Street BID Partnership, all united to bring this fun tradition to this diverse neighborhood.

The festivities began at Manuel de Dios Unanue Park, located at 83rd Street and Roosevelt Avenue. R.Evolución Latina’s own, renowned Broadway performer, Luis Salgado and the group, BombaYo were joined by dozens on the streets and greeted with grins as they floated their notes at full blast along Roosevelt Avenue, up 82nd Street and finalizing their route at Centro Cultural Barco de Papel’s headquarters at 40-03 80th Street. A spontaneous dance party sprouted in the middle of the Restaurant La Abundancia and an improvised performance in front of the 7 train subway stop at 82nd street. The parranda line danced and sang in the street accompanied by panderetas (a kind of tambourine), a güiro, maracas and a cow bell, surprising hundreds of passersby with this Puerto Rican tradition on the cold but brilliantly sunny Sunday. 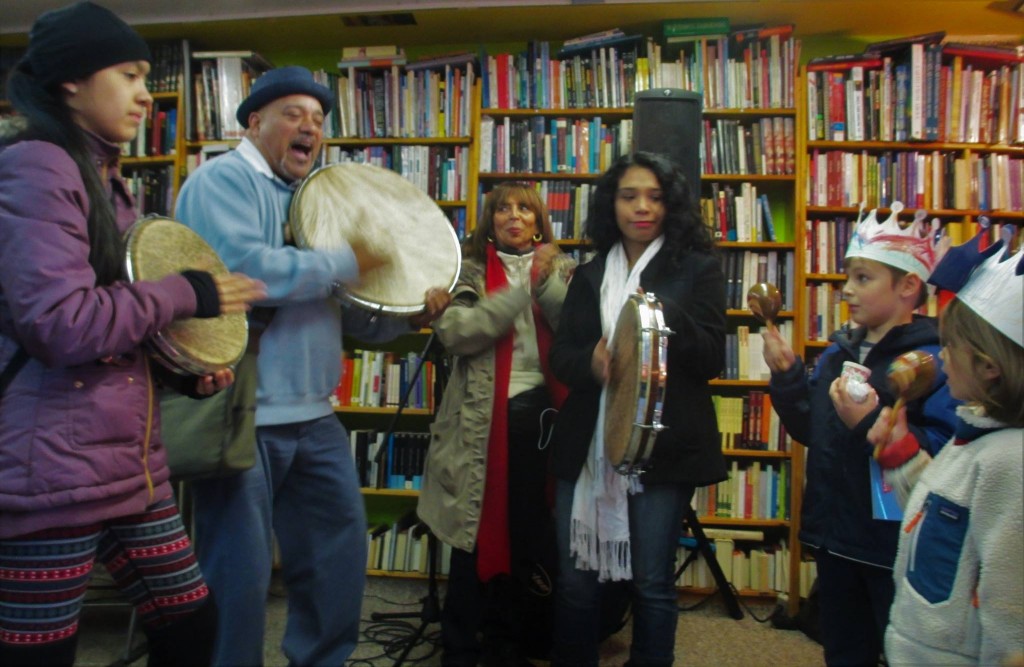 The parranda ended at Barco de Papel bookstore where Jose Ortiz, aka, “Dr Drum,” founder of BombaYo, conducted a family workshop explaining the musical origins of plena, the traditional percussion rhythms of Puerto Rico. He shared the tambourines know as panderetas with all attendees, allowing for everyone to be part of the plena orchestra. He explained how plena’s percussion is based on the music of three kinds of tambourines. The largest one is called a seguidor, which provides the bass sounds, the medium sized one is called a punteador, which gives the basic knock. The smallest pandereta is pointedly the most difficult one to play, for it provides the rhythm variations and improvisations. After the introduction, children and family members played and sang some typical melodies. The ambiance of the group was infectiously joyful.

The day’s festivities completed with an art workshop for kids who made and painted their own crowns replicating the three Kings who reached their journey, which is known as the Feast of the Epiphany. Before heading home, the children received gifts of books courtesy of R.Evolucion Latina. Find event photos in our Facebook page. 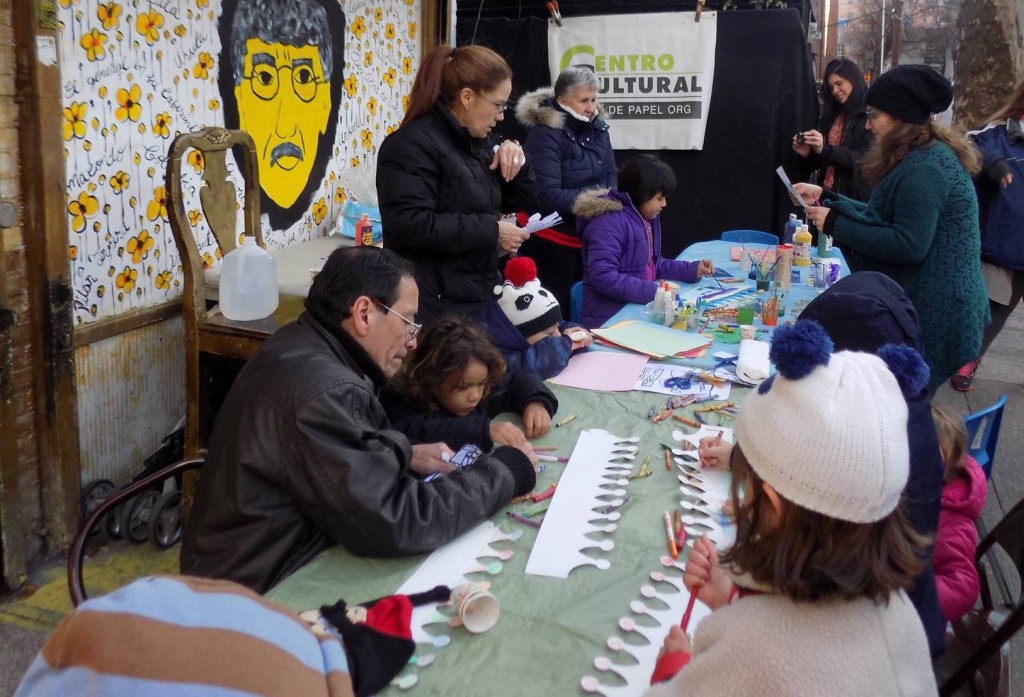 R. Evolución Latina is an organization that utilizes the arts poised upon educational and collaborative programming to inspire the Latin American community to discover their utmost potential. Using the mediums of workshops, classes and summer camps, R. Evolución Latina helps in the formation and diffusion of art to new generations using programs in various disciplines such as dance, theatre, music, voice and so much more. While delving deeper into these mediums, participants have enjoyed the world that the arts has opened up to them.

Luis Salgado is “one of the young Latinos on Broadway who has dedicated his entire life to both dance and social work” as quoted on Broadway World. Throughout his career, Salgado has been honored as a choreographer and performer for his exceptional talents and vision to paint a story through movement. In the past 3 years his work has been on focusing as a director and producer with his company, Salgado Productions, which is committed to making Art with A Purpose.

BombaYo is a project dedicated to the preservation of the rich Afro- Puerto Rican tradition of bomba. Bomba developed in Puerto Rico over a period of 300 years, whose music and dance has Congolese and West African roots molded with aboriginal and European elements. With the direction of José L. Ortiz, “Dr. Drum,” and folklorist Melinda González, the group Bombayo surged from the streets of the Bronx, the same birthplace of hip hop and where salsa took root in New York City.

82nd Street Partnership is a Business Improvement District that is devoted to supporting business growth by creating a cleaner, more welcoming and sustainable neighborhood for everyone. It provides a range of local economic development programs, including neighborhood marketing, placemaking, streetscape beautification, supplemental sanitation, and advocacy.

Centro Cultural Barco de Papel is an active part of the life and culture of New York City. It offers quality programming on a permanent basis. Our activities have led an intercultural dialogue amongst writers and authors who represent our society. This space is available for all those persons who want to divulge and share their works with the community.