Eliana Machado was born in São Paulo and lives in southern France since 1994. She graduated in Russian, Spanish and Portuguese literature at the University of São Paulo and completed a doctorate in Hispanic and Latin American Studies at the University Sophia-Antipolis in Nice. She translated four novels into French by “carioca” (from Rio de Janeiro) writer Luiz Alfredo Garcia-Roza, published by Actes Sud. She is a full professor of Spanish, and has been teaching at the Principality of Monaco for 11 years (2004…). She writes poems, short stories and prologues. Honorable mention in the category “haiku” at the 2010 contest organized by Guemanisse publisher of Rio de Janeiro. Eliana Machado published her first book of poems, Blanco en el blanco (Ed. Scortecci , São Paulo) in 2010, and her second book, Locus Brasilis in 2012 in Peru (Ed. Mesa Redonda, Lima), which she launched at the 17th International Book Fair in Lima. Her third book, Succès Intimes, written in French and launched at the 2014 Book and Press Festival in Geneva, is a poetic and illustrated tribute to the family. Eliana Machado received the Foreign Author’s Award from the “Union de la Presse Francophone de Monaco” for her books Blanco en el Blanco and Locus Brasilis during the “IIIèmes Rencontres Littéraires Fabian Boisson”, in May 2014. Siete Cuentos Brasileños / Seven Brazilian Short Tales was published in New York (La Ovejita de Papel) in February 2015. *** 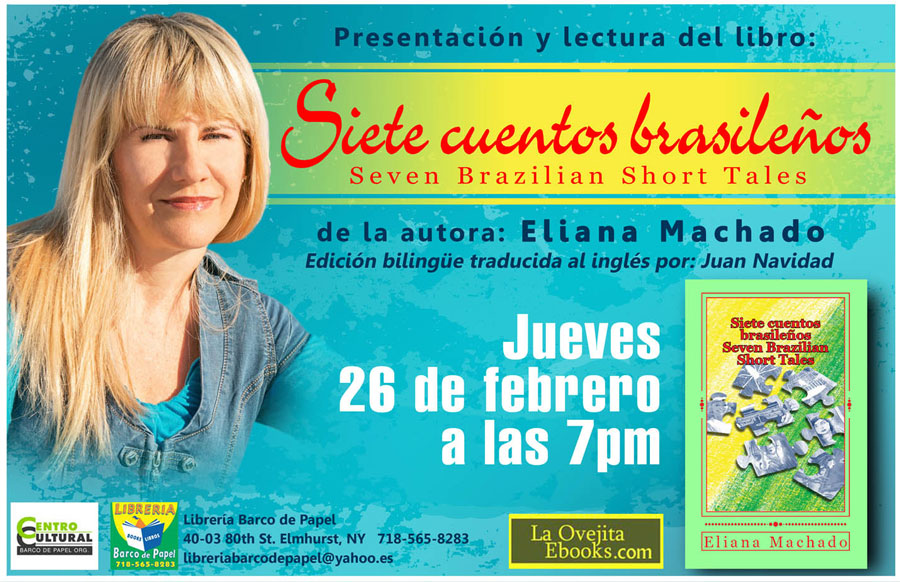