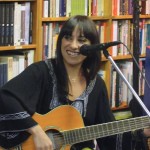 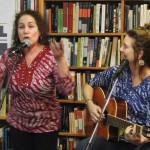 Cuban musician Jesús Álvarez, a proud promoter of Changüi, Nengones, Regina y Kiribá, ancient musical genres of his homeland in eastern Cuba, interpreted these rhythms in a warm soirée at Centro Cultural Barco de Papel on Friday, November 20. The main motive for the musical gathering was the presentation of his musical instrument, who he fondly named “Kaja Chu”, which is a take of the Cuban marimbula.

Fellow singers and musicians Ivette Lopez, Laura Vaccaro and Eve Zanni accompanied Alvarez for this function. Singer Lopez opened the night by delighting the public with her interpretation of two popular Latin American songs. Singer and guitar player Vaccaro with accompaniment by Zanni interweaved 3 songs, a Cuban bolero in Spanish, a popular bossa nova in Portuguese and jazz gold “Satin Doll” in English. Their excellent voices and no less brilliant interpretations warmed the stage for Álvarez.

Álvarez began his presentation playing a Cuban tres, a varied repertory of Cuban songs with Katherine Lacey’s, percussion prowess (who happens to be an indispensable member of Centro Cultural Barco de Papel) on the bongos and Lopez on the maracas. The group played boleros to guajiras to guarachas. With each transition, Álvarez provided listeners the rich history and background of each song. Afterward, he presented the star of the night, his Kaja Chu. Álvarez explained its functionality and the ease in which one can play. Percussionist Lacey ventured to play the first song and the worldwide debut of the Kaja Chu. Jeremy Feliciano replaced her in the bongos..

As the night progressed, things heated up and all the musicians joined together. Vaccaro and Zanni sang; Lopez rattled the maracas; Jeremy kept the heartbeat going with the clave and another Centro Cultural beloved, Diego Rivelino added rhythm with rain sticks. The event concluded its crescendo with the song made famous worldwide by Buena Vista Social Club, “Chan Chan.” Find photos of the event on our Facebook page.

Jesús Álvarez Bulté (Guantánamo, Cuba) is a musician, singer and composer who plays guitar, tres, charango and percussion. He is an expert in Changüi, Nengones, Regina and Kiribá musical genres from the eastern province of Cuba. In 1986, he played in the famed “Red Song Festival in Berlin” dedicated to Nelson Mandela.
Before moving to United States in 1998 he was member of two bands: Grupo Frontera and Septeto Típico Guantanamero and taught music in Guantánamo. He composed the hit “Nagüé que Bola” popularized by Soneros All Stars.In New York, where he resides, he has played with different groups specialized in Cuban, Colombian and Latin American music. He co-founded “Cubanana” (www.cubanana.com), a duet that has presented shows, workshops and didactic performances at schools, hospitals, institutions and young audiences in New York.

What is a marimbula?

The marimba, the base for the Kaja Chu, is a plucked wood box with a sound hole cut in the center of it. Across the hole, a number of metal strips are attached at one end to the resonating box. These metal strips are tuned to different pitches, and plucked to produce a baseline for the music. With roots in African instruments, it was originated in the province of Oriente, Cuba in the 19th century and spread throughout the Caribbean, the Americas and eventually Africa from Liberia to the Congo.

African slaves made the instrument from whatever scraps of material they could lay their hands on. Unlike typical African lamellophones used to produce complex polyphony and polyrhythms, the marimbula basically plays the role of a bass guitar, to provide the rhythmic and harmonic support for a band. There is no fixed rule about form and each musician builds to his taste. Kaja Chu is an Álvarez design of this instrument.