The bilingual book (Spanish/English) “The forgotten history: Bernardo de Gálvez and the independence of the United States” (Exlibric, 2022) by the professor of Spanish-American and Caribbean literature, Antonio García Lozada, was presented in Centro Cultural Barco de Papel on June 25, 2022. This publication was illustrated by Emily Fabrizi.

Dr. García-Lozada’s researched about Bernardo de Gálvez’, also called “America’s Spanish Savior,” who led one of the most brilliant military upsets against British troops, defeating them in the South during the American Revolutionary War.  Not only did Gálvez provide military power to help General George Washington earn its independence, but he also sent much needed supplies to finance the war, with the help of Cubans, by supplying money, commercial transactions, medicine, and rum for the combatants in New England.  This was just what General George Washington needed to help defeat the British in the South of Florida, Lousiana, and in Texas. Galvez’s siege of Pensacola in West Florida (1781) and the Battle of Baton Rouge (1779), helped to liberate the United States from Great Britain.

Professor Antonio García underlines in this publication the Latin American contribution to the independence of the United States  to curious children and young people highlighting  some of the forgotten heroes of American history such as Bernardo de Gálvez.

Dr. García-Lozada is a Professor of Modern Language at Central Connecticut State University for the past 22 years.  He also serves as the University’s Ombudsperson.  García-Lozada earned his Ph. D. from the University of Maryland, College Park, in Latin American and Caribbean literature.  His dissertation focused on a Colombian philosopher’s essays, Carlos Arturo Torres.  His research has changed over the years. Initially, he focused on Latin American novels written in the 20th C. Now he is more likely to be intrigued by 21st C Latin American literature and novels written by women. One of his prefer writers is the Uruguayan Cristina Peri-Rossi. 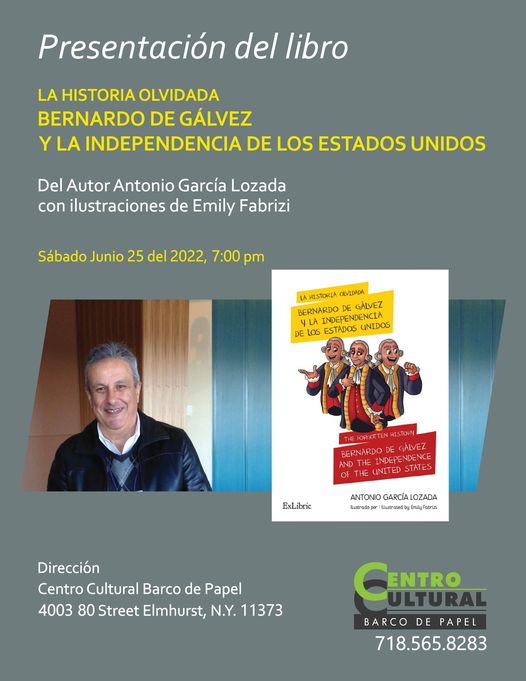