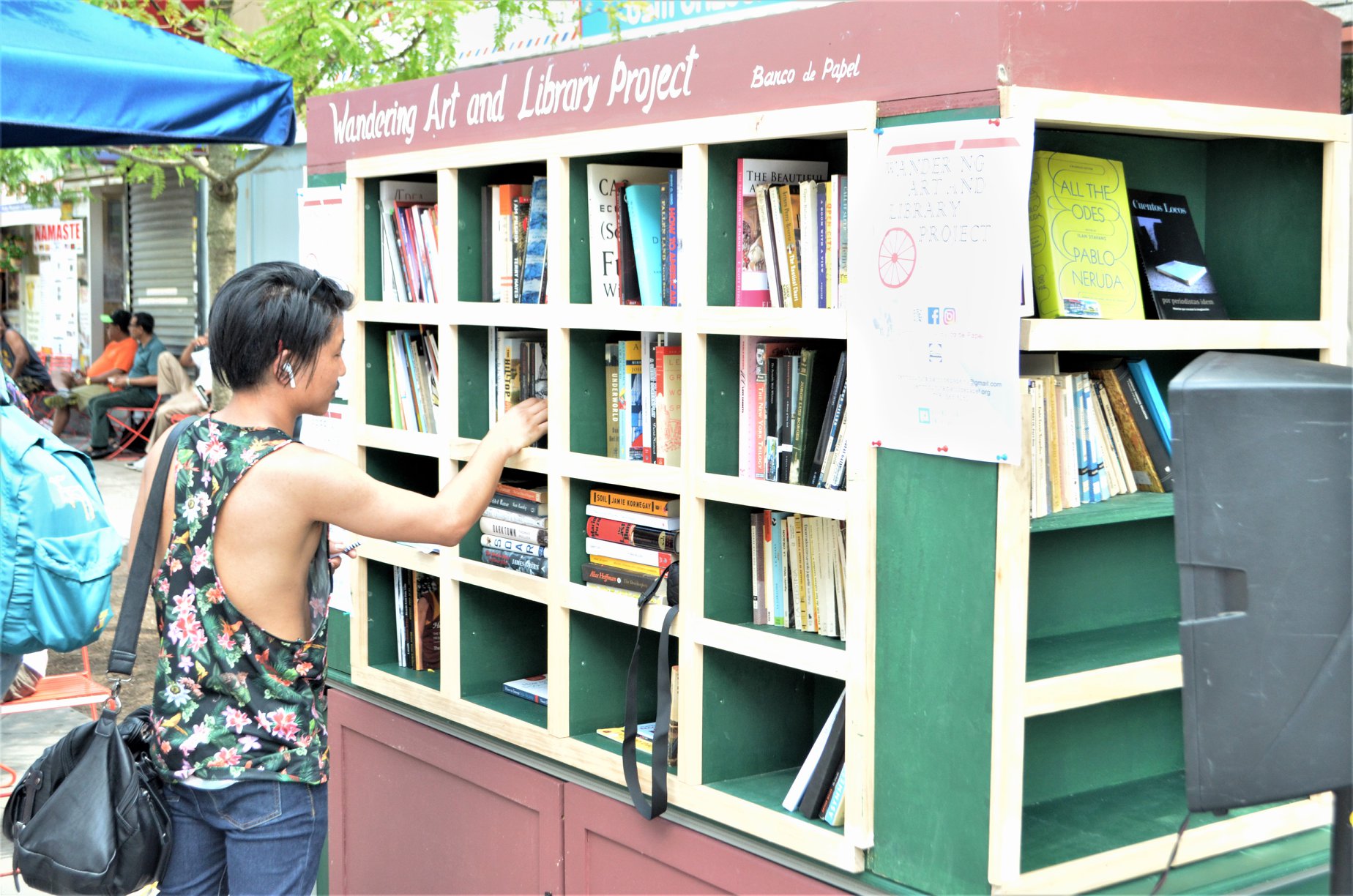 “Cities are places of barter, not just merchandise, but also of words, wishes and memories.”—Italo Calvino

Sponsored by the Queens Council on the Arts, this project encouraged the use of public spaces to reflect on literature, art and city life. It also payed tribute to those authors and writers who have used cities as an inspiration or literary theme and, at the same time, encouraged respect and care for public spaces. 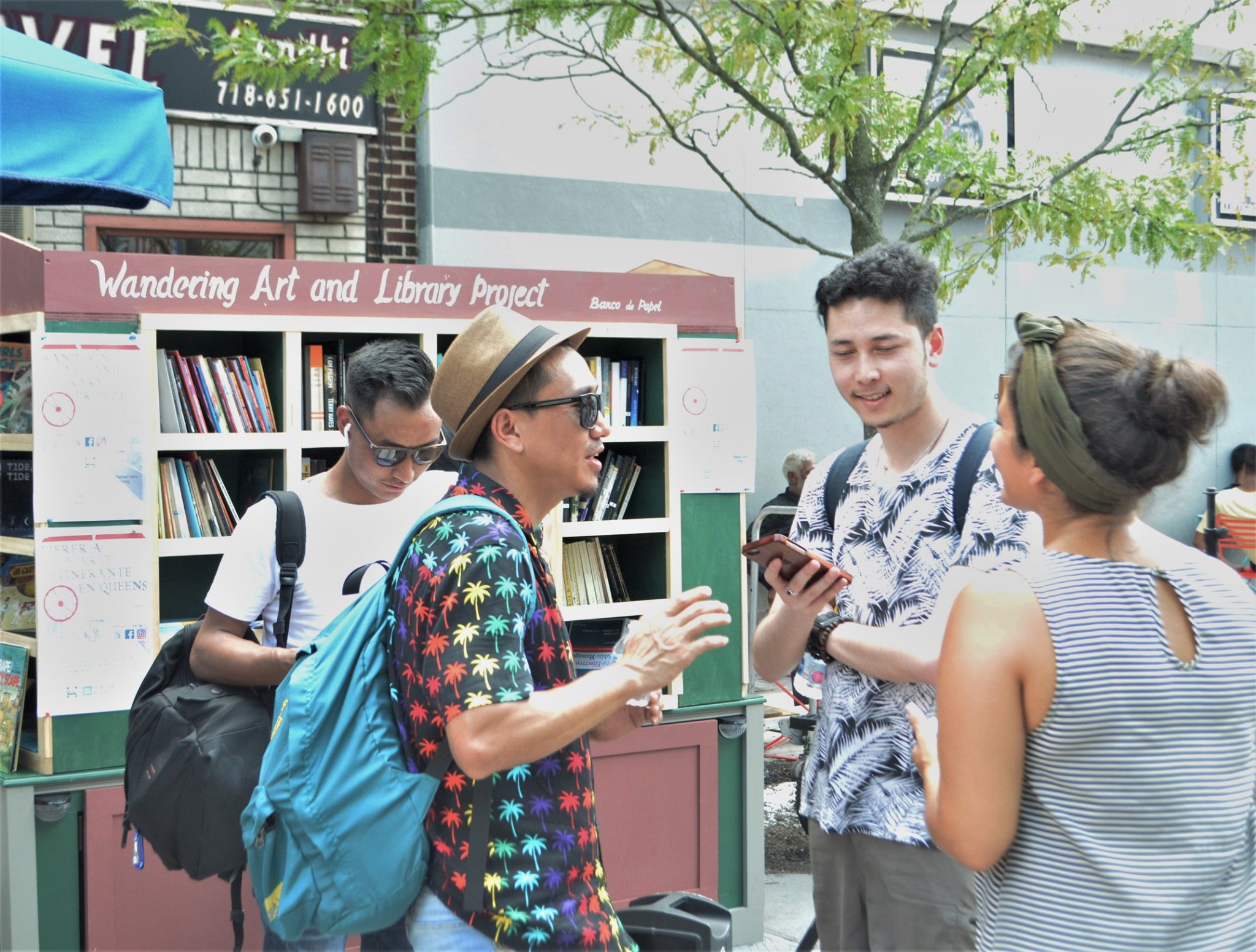 The list of activities included a monthly tour through neighborhood public squares, regular readings and an open microphone, where writers, poets, and artists from the community  participated. At the outset of the project, the mobile library had more than 300 books in Spanish and English in various genres including fiction, nonfiction, and poetry, among other topics.  All books can be read for free.

Design and Construction of the Mobile Library

The “Wandering Art and Library” is a product of the Centro Cultural Barco de Papel built by master carpenter Hector Franqui and its design was inspired by a mobile bookstore that sells second-hand books in the streets of Budapest, Hungary. 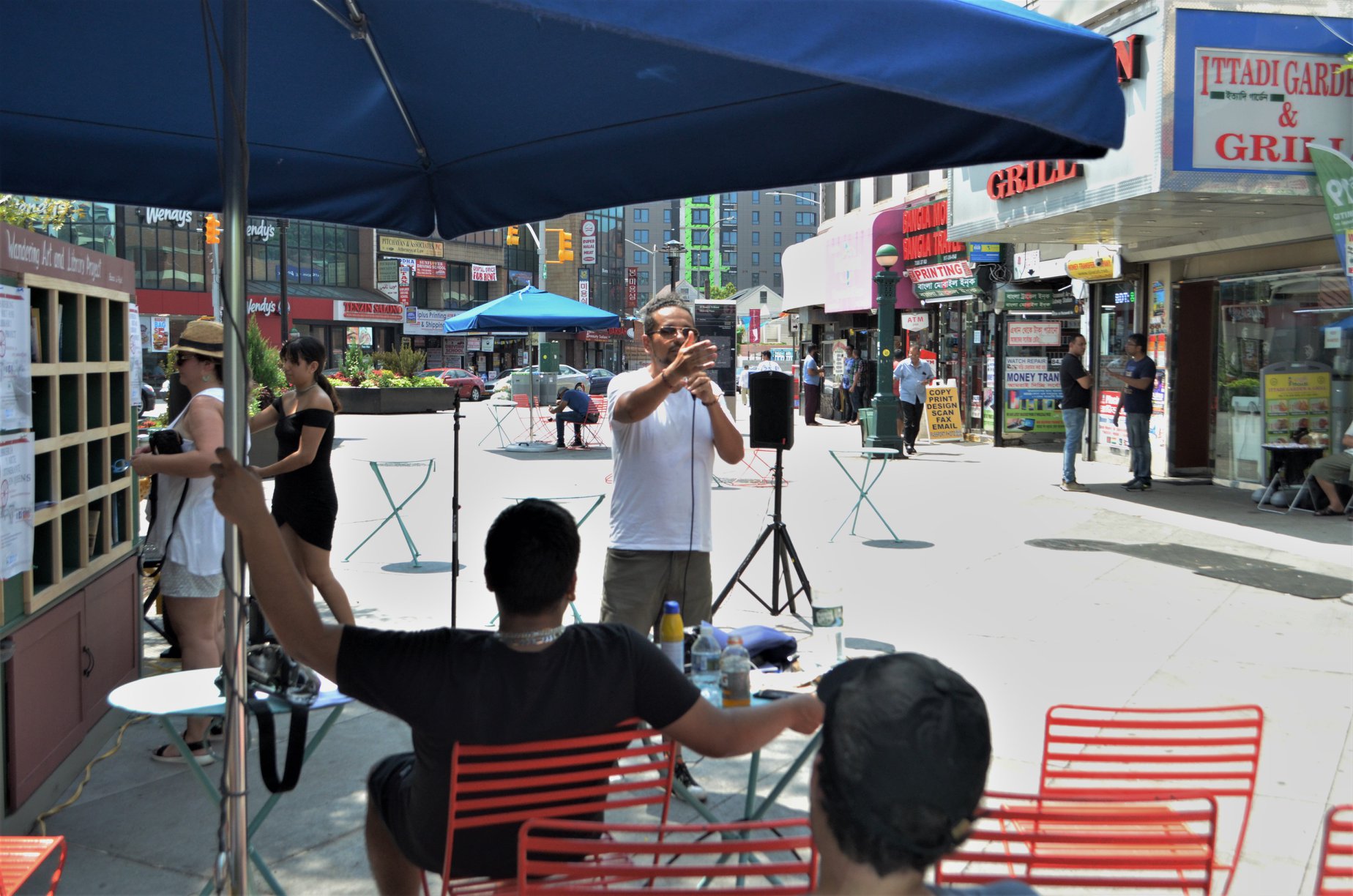 The portable wooden structure was designed to be towed manually and consists of three bookshelves. The books will be protected by a transparent acrylic window that unfolds upwards as  visor.  The mobile bookstore can also hold books in its lower part. The dimensions of this structure made it easily adaptable to either small or big spaces. The books were classified by thematic genres, such as urban literature, poetry, classics, translated Latin-American fiction, among others. 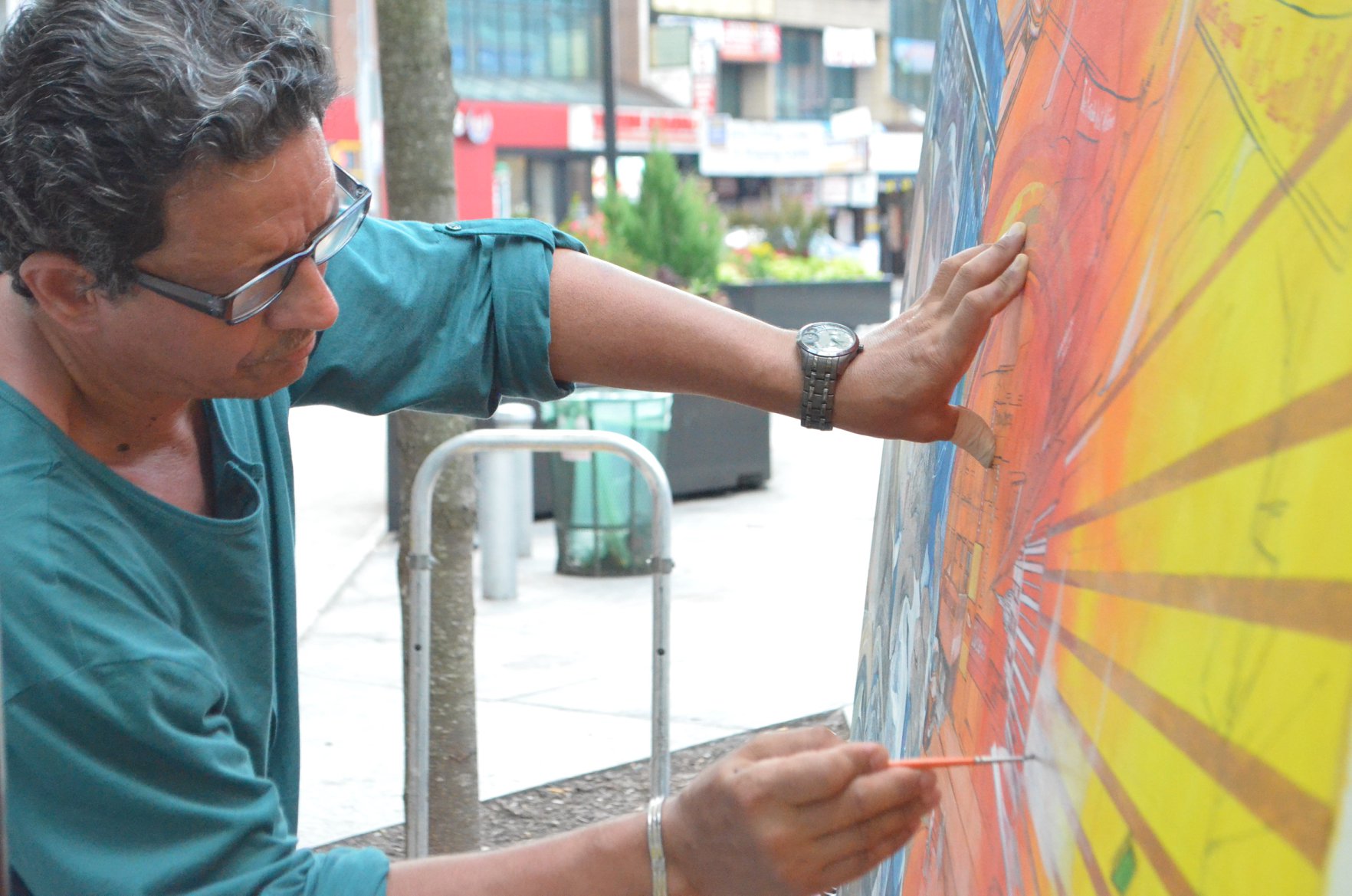 A mural by artist Guillermo Lorente was displayed on the side of the mobile library. The juxtaposition of the mural  emphasized how cities serve as an inspiration for the literary world and visual arts.

The piece was painted in oil on canvas and wood and was located on one side of the module creating contrast within the traditional functions of a mobile library where an interrelation between arts and books in public spaces has not been commonly exposed.  The work gathered allegorical architectural elements from the city of New York and images of Jackson Heights, Queens, as well as works of universal literature and elements triggering stimuli, seeking a visual-active involvement of the participant.

The tour began on June 21, 22 and 23, in Dunningham Triangle, which is a small triangle park located on 82ndStreet between Baxter Avenue and Ithaca Street. Located at a busy intersection where many pass by yet few know about the illustrious stranger who gives the name to this little park.  Launching this project in the triangle was a recognition to the Londoner Jabez E. Dunningham (England 1868 – New York 1945), who lived on 40-71 Denman Street, a short distance from where the triangle is and died at the age of 77. He was considered an early pioneer of progress and founded the Council of Civic Associations of Queens, which advocated against pollution, excess garbage and other problems that affected the area. Mr. Dunningham was also the London representative of the well-known publisher Joseph Pulitzer (1847-1911) in the early 1890s. In 1896 he moved to New York, where he continued working for Pulitzer until the death of the publisher in 1911. After finishing his publishing career, he dedicated the rest of his life to fighting for public improvements. 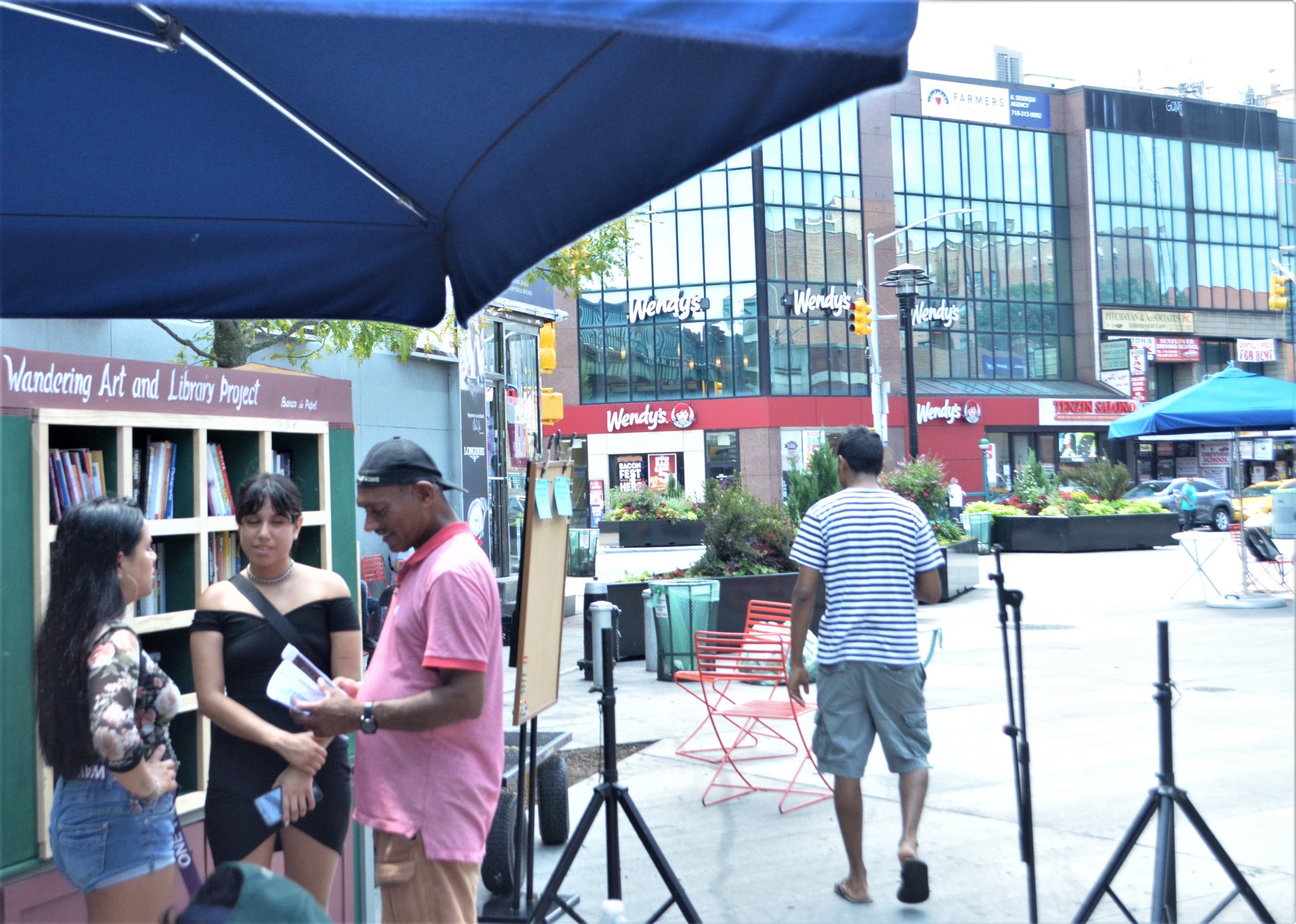 This Sunday, July 21, the tour continued on the Diversity Plaza an iconic public space in the heart of Jackson Heights described by Mayor Di Blasio as “An epicenter of culture, community, and vibrancy within the most diverse borough of Queens.” Called the intersection of the world, people of ethnic backgrounds all over the globe gather to meet and interac, all together as a community.

The appearance at the first location is being done with the support of the 82ndStreet Partnership, a local non-profit organization devoted to the area’s economic development.

Mr. Franqui is a New York born and raised Puerto Rican professional carpenter who is passionate about his trade. He loves transforming wood into usable items such as chairs, tables, bookshelves, and desks.  His journey as a maker began by creating furniture for his home.  Mr. Franqui attended Queens Vocational High School where he further honed his craft. He currently has his own workshop where he continues to carry out his craft.

Mr. Lorente is a Cuban-born plastic artist and painter with a Bachelor of Arts degree from Habana’s Art University, Institute for Superior Art (ISA). Prior to departing Cuba, Mr. Lorente was a professor at the Pedagogical  Art Institute and School of Design of Belascoin in Habana, Cuba.  In 1995 he migrated to Sweden where he became a professor at the Art School of Upllands-Väsby.  While in Sweden Mr. Lorente also launched his own art studio where he was featured in various individual and collective expositions.  He currently resides in Jackson Heights, New York where he continues to pursue his creative endeavors.